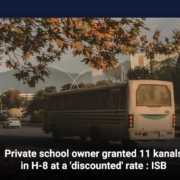 The CDA allotted the land at the rate reserved for amenity plots through its authorised move.

According to sources, a plot given to the school in 2007-8 in F-11 was later cancelled because, among other reasons, inhabitants of F-11 opposed the plot’s earmarking in the region. Later, on the court’s direction, the CDA reheard the matter, returned the plot, and rezoned it H-8, which is reserved solely for educational institutions.

The CDA, on the other hand, chose to charge Rs84,716 per square yard, which means that the allottee of the site must deposit Rs470 million in the CDA’s coffers in order to receive the assignment letter.

CDA had proposed charging the owner around Rs475 million but ultimately decreased the amount to Rs237.5 million.

“If the aforementioned offer is acceptable, please arrange for payment of the premium of Rs475,629,510 plus AGR @ Rs6 equal to Rs33,687 within four months of the date of this letter, so that this office may proceed with the matter,” it added.

Additionally, it stated: “In accordance with the Honourable Supreme Court of Pakistan’s judgment/decision dated 30-9-2016 in Civil Petition… of 2014 and Civil Review Petition of 2015, your request has been considered/examined and acceded to, and the Authority has decided to offer plot no. 101 measuring 5614.40 square yard in Sector H-8, Islamabad.”

According to sources, the rate was fixed, which was reflected in the May 2021 offer letter in accordance with the rate set for institutions.

Read more with EL news : What comes next? Karachi awaits the outcome with bated breath

However, the estate arm changed the offer letter, lowering the price from Rs84,716 to Rs42,358 (decreasing the total cost from Rs470 million to around Rs238 million).

This offer was accepted, and the final allocation was made.

CDA member Estate Naveed Illahi defended the allotment in an interview with Dawn. He stated that the estate wing revised the fee on the recommendation of the finance wing because the previous pricing was not intended for school plots.

Director (Estate Management) Anwar Khan, who issued the final allotment letter, also justified the allotment, stating that the site was assigned based on the pricing determined by the finance wing’s costing section in conformity with applicable rules and regulations. He stated that this was an old case, as the school was initially given a plot in 2008 and was charged at the school-specific rate.

It is worth noting here that the CDA previously allocated plots to private schools on a throwaway basis.

In 2007, a policy for private schools was implemented, and the program’s assignment of plots drew much criticism, resulting in the cancellation of 17 of the total 19 plots assigned to private school owners.

The aforementioned property was likewise one of the initial 19 awarded in 2007-8.

CDA authorities stated that a 6,000-square-yard site in F-7/2 was previously allotted to the owners of Froebels International School for Rs70 per square yard in 1981.

Similarly, the proprietors of National College of Business and Management Sciences and Wahid Public School have been allocated plots measuring 8,888 square yards and 14,605 square yards, respectively, at a cost of Rs250 per square yard.