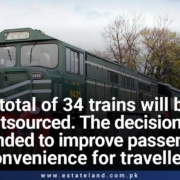 Lahore railways decided on Wednesday to outsource the commercial administration of 34 passenger trains to the private sector to improve customer convenience.

The administration has begun the bidding procedure in this regard, with 17 passenger trains already being offered through open tendering. But, unfortunately, only 11 of the 17 trains could obtain single bids due to a lack of interest among bidders. Meanwhile, six trains are attracting the attention of several companies.

Out of the 17 trains, Pakistan Railway Advisory and Consultancy Services Limited (PRACS), a subsidiary of the Ministry of Railways, has acquired eight, including trains that run on critical lines including Tezgam, Hazara, Millat, and the Karakoram. PRACS submitted the highest proposal for the Karakoram Express, with an annual bid of Rs1.84 billion, according to sources.

The PR’s recent initiative to privatize trains as part of its ambitions to find a solution to the various difficulties, including continual complaints about its inadequate services, train traffic interruptions, and increasing accidents.

In another move, the railroad’s ministry announced on Wednesday that it had decided to place the seats that had been vacant for a long time in all eight divisions around the country in a pool of “surplus.”

The ministry tossed unoccupied seats from grade 1 to grade 16 into the excess pool to make up for its losses. But, for an extended period, the chairs remained empty.

In this regard, the ministry requested detailed biographical information from all divisional personnel officials assigned to the seats. As soon as the data is compiled, it will be transmitted to the ministry.