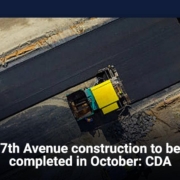 Work on the 7th Avenue Interchange will be done by October this year, according to the Capital Development Authority, which is in charge of the project (CDA).

It is being built near Aabpara at the intersection of 7th Avenue, Srinagar Highway, Khayaban-i-Suhrwardi and Garden Avenue, where there are a lot of roads.

Officials from the engineering wing of the CDA say that work is going well and that more than half of it has already been done. According to the PC-I, the work will be done by October and there will be no delays in this regard.

In March, the Australian cricket team and the Organization of Islamic Cooperation (OIC) were in town, which caused some problems with work. “We are moving forward in the right direction, and we are sure that work will be done in October,” said an official from the CDA. They will then move to the slip roads and so on.

Those projects have been done by the National Logistics Cell (NLC).

The 7th Avenue Interchange and two other projects were started last year by then Prime Minister Imran Khan. I.J.P Road was repaved and expanded, and the Sihala flyover was built.

The interchange will look like a cloverleaf, with four left and right loops. There will also be an underpass to connect the two parts of Khayaban-i-Suhrwardi together. In 2008, the CDA’s management talked about building the interchange a lot, but no real progress was made.

There has also been a lot of traffic at the intersection.

When people go to work and school, they see a lot of long lines of cars and trucks.

Officials from the CDA say that this project is almost moving faster than any other road project.

After a month of problems, “we don’t think we can finish this project before October,” an official said. “We are sure this project will be done.”