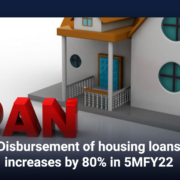 The disbursement climbed by Rs23.5 billion between July and November, according to SBP data. Bankers stated various causes for the unexpected surge in loan disbursement, but the primary factor was the government’s and central bank’s continual threat of penalties.

According to the report, the Mera Pakistan Mera Ghar Scheme (MPMG) disbursed only Rs32 million in December 2020.

Initially, progress was glacial, reaching Rs5.223 billion by the end of June 2021.

In light of the poor pace of progress, the SBP and the government began pressuring banks by requiring them to set aside 5% of their loan portfolio for housing and construction to boost economic growth and create many employees.

Bankers attribute the significant rise to the government’s and SBP’s continual threat of sanctions.

On July 15, 2020, the SBP established a mandatory aim for banks to issue mortgage loans and financing to developers and builders while also requiring banks to raise their housing and construction loan portfolios to at least 5% of total private sector credit by the end of December 2021.

Additionally, the central bank chose to penalize banks that fall short of their G-MSS targets in terms of housing units and payments starting on July 31, 2021. Disbursement of housing loans increases by 80% in 5MFY22.

Banks disbursed a total of Rs28.744 billion between January and November 2021, compared to Rs99.7 billion in approved loans.

By the end of November, however, total loan demand had increased to Rs244.9bn due to increased application volume.

In April, the SBP mandated that banks meet obligatory monthly targets for housing units and disbursements (G-MSS targets for the government’s Mark-up Subsidy Scheme) proportionate to their percentage of total banking assets.

Each month during FY22, disbursements increased, reaching a peak of Rs6.5 billion in November. Previously, Rs5.3 billion in October, Rs5.4 billion in September, Rs3.8 billion in August, and Rs2.5 billion in July were distributed.

Before FY22, the Pakistan Banks’ Association (PBA) created and distributed a baseline income estimation model to member banks through a collaborative process.

The SBP believes that this estimating approach will alleviate some of the general public’s challenges when seeking house financing.