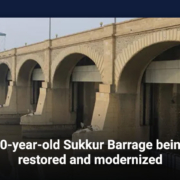 The 90-year-old Sukkur Barrage is being fixed up and made more modern by the Sindh Irrigation Department and the World Bank, according to news from October 6. The project, which is being paid for by the WB, is expected to cost PKR 34 billion to finish.

Details show that the project was started at a ceremony at the barrage by WB Task Team Leader Francois Onimus and Sindh Barrages Improvement Project (SBIP) Project Director Ghulam Mohiuddin Mughal. When he spoke at the event, Mr. Onimus said that after the Sukkur Barrage was fixed up and made more modern, the oldest barrage in the country would be able to handle an unusual rise in water flow during flood season in the years to come.

The news sources said that Mr. Onimus said that all 66 gates of the barrage will be replaced within the four-year time frame, along with the barrage’s civil and mechanical parts. SPIP Project Director Mighal says that the Sukkur Barrage has reached the end of its useful life. However, this project will fix the problems with the off-taking canals and main structure.

A member of SBIP’s technical team said that replacing the gates and the system that raises and lowers them will add 50 years to the life of the barrage. The new gates will make sure that there is a steady supply of water and stop silt from getting in the way. News sources say that the department in charge is thinking about making a new feasibility study to find a good place to build a new Sukkur barrage.