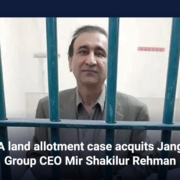 Ansar Abbasi, an investigative reporter for The News, said the court threw out a “case based on lies” by the accountability watchdog.

Rehman was acquitted in a “fake case” meant to “tame” him, said journalist Raza Rumi. Tweeted him: “The farce of accountability, or the witch hunts of political opponents and media owners, gets exposed every day. It’s a waste of time.”

Rehman was arrested in March 2020 by the National Accountability Bureau (NAB) because he didn’t answer their questions in a hearing about the case well enough. Following that, the Supreme Court granted him bail after being held for about eight months.

It took the accountability court until November 2020 to make Nawaz Sharif an absconder in the same case. Then, the court issued a warrant for Sharif’s arrest for the rest of his life. Sharif had been found guilty of absconding because he didn’t show up for court.

When the Lahore High Court ruled on Nov. 16, 2019, the former prime minister could go to another country for four weeks to get medical care.

As a follow-up, the Supreme Court granted bail to the Jang Group’s chief executive officer in a NAB investigation.

As soon as he was freed from prison on bail, the former premier left for London on November 19, 2019. Three days after that, he had left the country and hasn’t come back since.

The accountability court also told the NAB to move on to the next step in the case, taking the absconder’s movable and immovable property.

The claims:
According to the NAB, Rehman illegally got permission to build on 54 one-Kanal lots in Block H, Johar Town. A report said that then-Punjab Chief Minister Nawaz Sharif helped give land to a company in 1986. This was against the policy of exemption and the law against making money.

It said the suspects lost the government money because they gave away land that was supposed to be exempt.