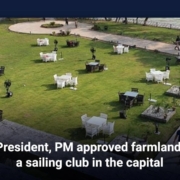 President, PM approved farmland, a sailing club in the capital. Defending the establishment of its sailing club at Rawal Lake and farmhouses on Simly Dam road, the defence ministry has claimed that approval for land for both projects was granted by the then president and prime minister of Pakistan, respectively.

An intra-court appeal filed before the Islamabad High Court, challenging a judgement passed by Chief Justice Athar Minallah — who had ordered the demolition of the sailing club and asked the Capital Development Authority (CDA) to take over the farmhouses — is now expected to be taken up next week by a two-member division bench.

The appeal also asked the court to set aside the adverse findings against the navy, its former chief and all other officials, saying that the single-member bench did not consider the facts and exercised writ jurisdiction in a matter that pertains to the CDA.

Chief Justice Athar Minallah had, in his order, directed the CDA to demolish the sailing club and take over control of the naval farmhouses.

Appeal filed through defence ministry wants all observations against the naval chief, other officers to be set aside

In the Jan 7 judgement, he pointed out that “the mandate of the armed forces of Pakistan has been described in chapter 2 of part XII of the Constitution.”

The court termed it ‘an irony of fate that “the chief of naval staff and one of the branches of the armed forces i.e. the Pakistan Navy [was] involved in violating the enforced laws and transgressions from the mandate prescribed under the supreme law of the country, the Constitution.”

But in its appeal, filed through the defence ministry, the navy contended that “while interpreting the constitutional provisions with respect to the armed forces it must be remembered that the Constitution in term of Article 245 requires the armed forces to defend Pakistan against external aggression, but does not direct them to give their life if required to discharge this duty, or for that matter, take [the] life of [an] enemy.”

In essence, the navy’s argument is that the constitutional provisions that require the armed forces to defend the country and act in aid of civil power when called upon to do so “are general provisions and must be interpreted with wide amplitude.”

“One dreads to think what would happen if the armed forces act upon the view that since it is not expressly mentioned in the Constitution or any law that they should give their life while defending the country or take the life of the enemy, they should ensure that they defend the country without giving their life or taking the life of the enemy! Based on this view then, should the soldiers return from the line of defence because the country cannot be defended without deviation from the constitution and as such vulnerability due to violation of their oath to uphold the constitution?”

In the appeal, the defence ministry states that in 1992, it was president of Pakistan who sanctioned the creation of seven new directorates in Naval Headquarters, including the Directorate General of Welfare and Rehabilitation. It was this directorate that initiated the residential scheme for naval officers on Simly Dam road out of the welfare funds raised by them, and not from public money.

Discussing the sailing club, the appeal stated that “Navy has been maintaining, in possession of the area of the center at Rawal Lake for the last 25 years… to develop capacity of young athletes in water sports… to inculcate interest in rowing, sailing and other water sports.”

As per the navy’s stance, “the water sports centre is neither a club in the traditional sense nor it is a commercial enterprise”, adding that they had responded to a CDA notice issued in connection with violation of building regulations.

The appeal stated that “the prime minister of Pakistan on October 18, 1992 issued a directive for setting up a water sports center at six places, including Rawal Lake.”

The sports center was set up in compliance with the PM’s directive and was upgraded after 25 years of its establishment in 2018, the appeal argued.

The ministry has asked the court to reverse the decision to demolish the sailing club and transfer control of the naval farms to the CDA.