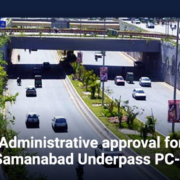 On September 30, news sources said that the Punjab government gave administrative approval to the revised Project Concept-1 (PC-1) for the Samanabad Underpass Project.

Under the new PC-1, the Lahore Development Authority (LDA) will spend PKR 2.03 billion on the road infrastructure project instead of the PKR 1.51 billion that was estimated before. According to LDA sources, the PC-1 has changed the price because inflation and the cost of building materials have gone up. In this case, LDA Chief Engineer II Mazhar Hussain Khan wrote to the Housing and Planning Department, which sent the letter out for final approval.

Read more with EL news: The cornerstone is laid for the Bhara Kahu bypass project

Also, the LDA has decided to start building the project in October and has said that Chief Minister (CM) Pervaiz Elahi will be there to break ground. The PC-1 says that the underpass will take 13 months to build and will be 500 metres long, 5.1 metres tall, and 8 metres wide. The project to build two lanes will make it easier for people coming from Gulshan Ravi to Samanabad.

It’s important to note that the Smanaabad Underpass project is one of the five mega projects that are part of the plan for managing traffic in Lahore.