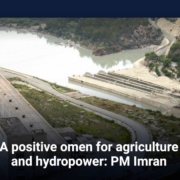 A positive omen for agriculture and hydropower. Even though Pakistan has been experiencing unseasonably warm weather, Prime Minister Imran Khan stated that the Tarbela Dam had been filled to its maximum capacity.

According to him, “this is a positive omen for agricultural and hydroelectric power generation.” Additionally, Prime Minister Imran conveyed his gratitude to the staff at the Water and Power Development Authority and the Indus River System Authority for their efforts in achieving “better water regulation.”

During the occasion, Prime Minister Imran Khan announced that his government has planned to build ten dams within ten years.

Read more with EL news : Overseas Pakistanis are able to invest through the Roshan Digital Account

We may confront a water scarcity in the future, in which case we would not be able to meet the demands of the population and farmers unless we have water storage, according to him. Earlier this year, the dam had lost 40% of its water storage capacity due to silting. It is a good omen for agricultural production as well as hydroelectric power generation.

As reported by official sources to the media, “According to the Hydrographic Survey 2017, the water storage capacity of Tarbela dam has been reduced by more than 40% as a result of silting in the reservoir.” According to the researchers, the live and gross storage capacities of the Tarbela reservoir have decreased by 37.524% and 40.58%, respectively, since the pool began operating.