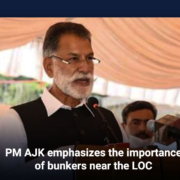 PM AJK emphasises the importance of bunkers near the LoC. Ali Amin Gandapur, Federal Minister for Kashmir Affairs and Gilgit-Baltistan, paid a courtesy call on Azad Jammu and Kashmir (AJK) Prime Minister Sardar Abdul Qayyum Khan Niazi in the federal capital to discuss issues pertaining to the Azad Jammu and Kashmir Council, the construction of bunkers along the Line of Control (LOC), and party affairs, among other things.

The AJK Prime Minister stated on the occasion that India has stepped up its reign of terror in occupied Jammu Kashmir and is now targeting the civilian population along the line of control.

He stated that the residents of the LOC, along with the Pakistan Armed Forces, have been making sacrifices for the country’s protection.

PM Niazi of AJK emphasised the importance of completing and constructing bunkers for the people on the LOC. He stated that the Kashmir Growth Package would include special initiatives for the development and prosperity of the people living along the LOC.

Today, the Prime Minister will lay the groundwork for the construction of the 128-kilometer Lilla-Jhelum dual road.

Pakistan’s government and people will continue to provide political, diplomatic, and spiritual support to the Kashmiri people in their quest for self-determination, Minister Gandapur assured.