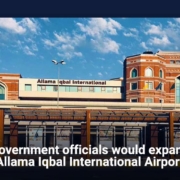 News sources said that the Civil Aviation Authority (CAA) confirmed on Monday, June 13, that the federal government plans to expand Allama Iqbal International Airport. The plan calls for the airport’s land to be expanded and for more passenger lounges to be built.

It is said that the decision was made at a meeting led by Khawaja Saad Rafique, the minister of aviation. The minister said that the current airport needs to be made bigger to fix flight operations problems and keep birds from hitting planes when they land or take off. He also said that there should be different lounges for people on international and domestic flights.

He also said that airports should be built to meet international standards. Finally, the CAA members told the minister about the needs and requirements of airport flight operations and the steps needed to fix these problems.