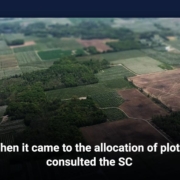 When it came to the allocation of plots, consulted the SC. The Supreme Court has been contacted by various serving and former government officials challenging the Islamabad High Court’s (IHC) restraining orders on allocating plots to judges, bureaucrats, and government employees through balloting in the capital’s F-14 and 15 sectors.

Several serving and retired federal government employees have filed two petitions against the IHC’s August 20 and September 13 judgments, pleading with the supreme court to enjoin the IHC from passing similar orders against the petitioners.

The petitioners assert that they are allottees of plots/land in subject sectors F14-F15 Islamabad and have long deposited the required amount with the Federal Government Employees Housing Authority (FGEHA) instead of their assigned plots.

Additionally, it is contended that the issue of whether could have acquired the land for the FGEHA was not the subject of the writ petition. In contrast, the impugned order dated Sept 13, 2021 stated otherwise and went beyond their prayers, even though it was not the issue that was raised or agitated before the IHC.

“The petitioners have suffered irreparable harm as a result of the impugned judgement dated Sept 13 issued by the learned division bench of the IHC being illegal.”

The petition stated that because the IHC’s exercise of its jurisdiction under Article 199 of the Constitution extends beyond the grievance of an aggrieved party or individual, it amounts to suo motu jurisdiction, which a high court lacks. Thus they must set the order aside as it is not legal and sustainable in law. When it came to allocating plots, the committee consulted with the SC.

Additionally, the petition argued that while exercising jurisdiction in the instant case, the high court acted with deference by passing an order that amounted to judicial overreach, necessitating intervention by the supreme court.

“Constitutional jurisdiction under Article 199 of the Constitution cannot be exercised in a vacuum, particularly when all contentious issues regarding the acquisition and public interest/public purpose were previously resolved with admirable clarity by this court’s larger bench in reported judgement 2021.

The petition said that the IHC could not reaffirm or reconsider the proceedings on a subject that this court has already determined. These principles have been further developed in this court’s many rulings.

“The high court misunderstood and misapplied the term of an aggrieved or aggrieved person as defined in Article 199 of the Constitution.”

The petition alleged that the high court exceeded its constitutional authority and violated the rules of oversight jurisdiction entrenched in Article 199 of the Constitution and declared by this court. When it came to allocating plots, the committee consulted with the SC.

Keep up with Estate Land Marketing for news and updat