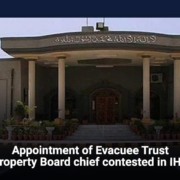 The vice-chancellor of Iqra University, Dr. Mohammad Ali, filed a complaint about the appointment of Habibur Rehman Gillani as chairman of the ETPB. He said that the work was made “mysteriously” during a “vacuum” caused by the recent constitutional crisis. Mohsin Akhtar Kayani, an IHC judge, heard the petition.

It says that on December 12, 2021, the Ministry of Religious Affairs put up an ad for the job of ETPB’s chairman.

As many as 41 people applied for the job, including the petitioner. On February 22, 2022, the selection board for the job chose 20 people who were invited for interviews on March 10, 2022.

The petition said that the board made a summary for the cabinet that included the names of Gillani, the petitioner, and Mr Mehmood.

Read more with EL news : The Shahkam Chowk flyover in Lahore is expected to be delayed

This summary was written for the federal cabinet to choose a good candidate.

The lawyer for the petitioner, advocate Hashmat Ali Habib, told the court that the summary was never approved because it was never on the agenda of the cabinet meetings until Imran Khan was ousted. This can be seen in the Cabinet Division meeting on April 9, 2022.

Mr Gillani was named chairman of the ETPB on April 11. The petition called this a “surprise.” The petition said that the notification was against the law because the prime minister was no longer in charge of the country from April 3 to April 9. A week before April 10, the office of the Prime Minister was empty.

The notification sent out did not follow the law and procedure set out in the Evacuee Trust Property Board’s Chairman (Appointment and other Terms and Conditions of Service) Rules 2019, which were made in 2019.

It was said that the appointment of Mr Gillani was made by the Ministry of Religious Affairs when the federal cabinet was dissolved.

Another thing to note is that there are no cabinet meeting minutes or an agenda notification about how the decision was made.

It sent a letter to the religious affairs ministry secretary and asked for an answer by May 12.