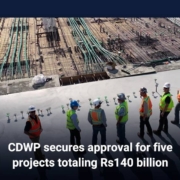 A Rs450 million project titled Strengthening the Existing Capacity of the National Institute of Health (NIH) Islamabad has been approved to ensure an efficient response to the Covid-19 pandemic. The Ministry of National Health Services (NHS) redesigned project will be funded with the assistance of the Asian Development Bank (ADB) and Agence Française de Développement (AFD) Group funds via the National Disaster Risk Management Fund (NDRMF) under a Grant Implementation Agreement.

The CDWP took on four transportation and communications projects, authorized two, submitted another to Ecnec for approval, and returned another for improvement.

The council forwarded the Rs129.944 billion Punjab Arterial Roads Improvement Programme (PARIP) to Ecnec for approval. The project will span the Punjab municipalities of Bahawalnagar, Bahawalpur, Layyah, Jhang, Toba Tek Singh, Vehari, Okara, Pakpattan, and Sahiwal. The project is being implemented by the Punjab Planning and Development Board.

The Punjab government would arrange finance of around Rs14.164 billion. The Asian Development Bank (ADB) will contribute Rs64.972 billion, while the Asian Infrastructure Investment Bank (AIIB) will contribute the remaining Rs50.808 billion. The project entails the construction of a 535-kilometer stretch of dual carriageway highway connecting several cities in Punjab.

Read more with EL news : The land acquisition process for the Rawalpindi Ring Road has begun

The project would include rehabilitation of the existing carriageway and construction of a second carriageway within the available and acquired ‘Right of Way.’ It aims to upgrade and dualize the highway network to improve the transportation system. The scope of work comprises the building of bridges, culverts, retaining walls, drainage improvements, roadside facilities, and auxiliary works.

The CDWP sanctioned the construction of a road between Sibi-Talli (20 kilometers) and Kohlu-Rakhni (80 kilometers) in Rs6.067 billion. It noted that the initial project was approved last fiscal year at a cost estimate of Rs4 billion. However, the project’s scope was increased and approved under a 50:50 cost-sharing arrangement between the federal and provincial governments. Baluchistan’s extra chief secretary for development has been ordered to assist the department of C&W in capacity building.

The CDWP also authorized a revised PC-1 for the Rehabilitation of Karachi Port Trust (KPT) and Rail Connectivity Project (phase-1), costing Rs2.652 billion. It included the repair of an existing track on a crucial part of the Pakistan Railway between KPT and Karachi Cantt and the construction of a new track to link to the Mainline (ML-1).

The section’s existing track has outlived its design life. The rails laid are 75R, 90 BSS, and 90R, all of which are obsolete, and the sleepers are primarily wooden and steel troughs, all of which are mostly unserviceable.