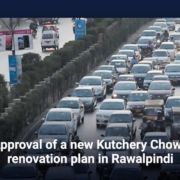 RAWALPINDI: The Provincial Development Working Party (PDWP) has approved a new plan to change Kutchery Chowk so that it can handle as much traffic as possible at the city’s main intersection.

The project will be done in 24 months, and the main square will stay open during that time.

After the Kharian Motorway is built, which will connect to the Grand Trunk Road and the planned Rawalpindi Ring Road, a flyover will be built to serve traffic coming from the Rawat side. This will make it easy to move 131,500 cars and trucks per day. With the old plan, the renovation would have been able to handle only 100,000 vehicles per day.

The project’s price has gone up from Rs4.879 billion to Rs6.422 billion because of the flyover and a 25% rise in the prices of building materials.

Planning and Development Board Chairman Abdullah Khan Sumbal led the meeting at which the new design was approved. The design was shown by Commissioner Noorul Amin Mengal and Dr. Habibul Haq Randhawa, who is the Chief Engineer for the Rawalpindi Development Authority (RDA).

A senior official from the Planning and Development Board told Dawn that the RDA had sent the Planning and Development Board a revised cost estimate of Rs4.879 billion, which included the cost of buying land. At a meeting on March 7, 2022, the cost was lowered to Rs4.879 billion, he said. Different design options were laid out based on how much service would improve, how much the project would cost, and how much traffic would benefit.

After talking with everyone involved, the best possible choice was chosen, he said. But now that the project’s scope has changed, the RDA has made a new PC-I that adds a Y-shaped flyover to help traffic from Rawat to Saddar, Saddar to Rawat, and Marrir Chowk to Rawat.

The commissioner told the forum that the project was originally approved with a design that included a two-level underpass. After talking with everyone involved, the design was slightly changed to include a Y-shaped flyover and an underpass to make the route safer.

The project was given the green light at a cost of Rs6.422 billion and a time frame of 24 months. The RDA will think again about raising the vertical clearance of the proposed underpass for Iftikhar Janjua Road traffic going to the airport from 3.6 metres to 5.3 metres.

RDA Chief Engineer Dr. Habibul Haq Randhawa said that Kutchery Chowk, which is in the middle of the city along GT Road, is where five major urban roads meet and have traffic lights. This included the road to the airport from Ammar Chowk, the road to Rashid Minhas from Marrir Chowk, and the roads to Adiala and Tufail on the south side.

The fact that there are district courts nearby makes traffic even worse, especially during rush hour. Due to how bad things are now, the RDA wants to do a feasibility study and a detailed design for remodelling the chowk.

Nespak was given the job through a competitive bidding process to find the best way to deal with the traffic jams.

“The proposed improvement will make it possible for two-way traffic on GT Road (N-5) at the Kutchery Chowk intersection to go in both directions without stopping. This will help daily commuters as well as solve traffic problems like delays and wasted gas,” he said.