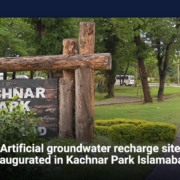 In Kachnar Park, ISLAMABAD, an artificial groundwater recharge site opened on Friday to help meet the demand for water in the federal capital.

The International Water Management Institute (IWMI) Pakistan, the Pakistan Council of Research in Water Resources (PCRWR), and WaterAid Pakistan came up with the idea for the pilot project.

The project “Demonstration of nature-based solutions for improving the resilience of groundwater aquifers in Islamabad” has started the artificial groundwater recharge site.

The project, which was paid for by WaterAid, found seven possible places in Islamabad where groundwater could be refilled.

IWMI’s country representative and regional representative for Central Asia, Dr. Mohsin Hafeez, spoke at a media briefing about the water problems in Islamabad, which have gotten worse because of wasteful use of rainwater, the city’s horizontal growth, over-extraction of groundwater resources, poor water supply, sanitation and hygiene problems, and unsustainable use.

Under a pilot project, seven possible places in Islamabad to refill groundwater have been found.

“On average, Islamabad gets 1,400 mm of rain a year. “We can meet the demand for 46 million gallons of water per day with the supply of 45 million gallons per day if we save just 30% of the rainwater through artificial groundwater recharge sites,” the official said.

He said that IWMI had built the first state-of-the-art artificial groundwater recharge pilot site with all the tools needed to measure groundwater quality, groundwater level, rainfall, and the amount of rainfall put into the aquifer.

Dr. Hafeez said that the project will give evidence-based information about how rainfall affects groundwater replenishment in Islamabad.

“In Islamabad, there are problems with not having enough water, so IWMI has suggested that the Capital Development Authority (CDA) install rainwater tanks at the household level,” he said.

Kachnar Park was chosen because it gets a lot of rain and has underground storage space for 566,000 litres of water that is three feet deep. Experts said that this monsoon season, the twin cities would probably get 40% more rain.

Dr. Mohammad Ashraf, who is the head of the PCRWR, said that rainwater harvesting to refill groundwater was part of the solution to the water supply problem, but that it needed to be scaled up to solve problems with groundwater depletion.

He said that Islamabad had lost about one metre of groundwater compared to the average amount of rain that fell there each year.

“It means that we could easily fill the gap between supply and demand with groundwater if we used recharge to save rainwater in a smart way,” he said.

Mohammad Yahya Akhunzada, the Joint Secretary of the Ministry of Water Resources, asked the media to teach people about collecting rainwater to water plants and save water resources in general.

Rana Shakeel Asghar, a member of the CDA’s Finance Committee, talked about how IWMI, PCRWR, and WaterAid were piloting the project and how they hoped it would help refill groundwater.

He said that because Islamabad needs more water, it was important to recharge the groundwater by collecting rainwater.

In order to do this, the CDA and PCRWR worked together to build 100 groundwater recharge sites. CDA planned to add more sites for putting water back into the ground.

Arif Jabbar Khan, who is the country director for WaterAid, said that Pakistan had problems with both the quality and amount of surface and groundwater that could be used for drinking.