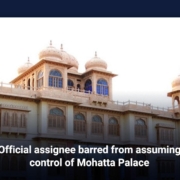 Additionally, a division bench presided over by Justice Aqeel Ahmed Abbasi issued notices of the next hearing to the respondents/legal heirs of the plaintiff, who filed a suit in 1971 regarding Mohtarma Fatima Jinnah’s heritage property in Clifton.

The Sindh government, through the culture secretary and director general antiquities and archaeology, filed an appeal against two orders of a single-judge bench directing the official assignee to take over the building and establish a medical college/hospital there, as well as refrain from using any name other than Qasr-e-Fatima to refer to the property in question.

At the outset of the hearing, Sindh Advocate General Salman Talibuddin stated that the official assignee had written a letter to him and the culture department director scheduling a meeting on Nov 3 to facilitate his taking over possession of the property following the impugned order.

SHC issues notices in response to the Sindh government’s appeal against an order authorizing the establishment of a medical college in a heritage building.

He asserted that a provincial law officer attended the meeting and requested a postponement of the property’s transfer because an appeal against the order had been filed.

He contended that the official assignee had rescheduled the meeting for Nov 9. He would take over the building in question at that time, causing the appellants irreparable harm and irreparable loss unless the impugned orders were suspended.

Justice Abbasi then reminded him that an assistant advocate general (AAG) had previously consented to establish a medical college on the property in question.

Read more with EL news : F-9 Park deserted restaurant will be turned into a museum

The AG contended that the AAG was a junior officer appointed only a few months before.

The bench also questioned Advocate Faisal Siddiqui, the trust’s counsel, about how the trust established a museum and who gave the trust possession of the palace.

He contended that the provincial government, which established the trust, granted possession to his client.

Advocate Khwaja Shamsul Islam, appearing for the respondents, pleaded with the bench to expedite the matter, stating that it had been pending for more than half a century.

Justice Abbasi stated that the bench would attempt to hear the appeal daily.

The appellants contended that AAG Ghulam Akbar Uqaili consented to the impugned order of October 13 without authority. He lacked instructions to record his consent, and that his consent was therefore not binding on the appellants.

They contended that the SHC approved the sale of the property in question in March 1993 because the provincial government purchased it after paying the sale price. All parties agreed that the sale price determined by the official assignee was the property’s correct market value in 1993.

Additionally, they contended that with the sale proceeds accepted and the property transferred to the appellants, the property in question ceased to be part of Miss Jinnah’s estate, and thus the parties’ claim in the suit before the single bench was now limited to the money deposited by the government with the nazir of SHC.

They argued that the Sept. 29 order regarding the heritage building’s name and the Oct. 13 order issued by the single-judge bench should be suspended.

The Mohatta Palace Gallery Trust, which is currently operating a museum at Mohatta Palace, also intervened through its trustee and authorized person Abdul Hamid Akhund.

On October 13, the SHC directed the official assignee to assume possession of Mohatta Palace and create a list of all inventory stored there.

The order was made in response to a suit filed in 1971 by a relative of Miss Jinnah against the Shireen Jinnah Charitable Trust and others regarding the administration of her moveable and immovable properties, including Qasr-e-Fatima.