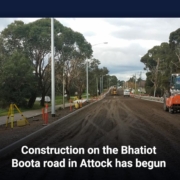 Construction on the Bhatiot Boota road in Attock has begun. Malik Amin Aslam, Special Assistant to the Prime Minister on Climate Change, has announced that building of the 12-kilometer-long Bhatiot Boota road has begun, according to media reports that have appeared recently.

It is stated that the people of Attock and seven villages in Tehsil Jand, including Dhok Rati Kasi and Salman Abad, and Khunda, Bhatiot and Mahora, will gain from the construction of the Bhatiot Boota road. The road will also benefit residents of Attock and other neighboring places. In addition, according to the CM’s assistant, this road will make it easier for travelers from Pindigheb to go.

As a result of the development of the Bhatiot Boota road, the travel distance will be cut by half. The road is supposed to produce economic activity once it has been constructed, according to the plan.