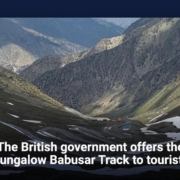 News sources said that on Sunday, July 3, the Gilgit-Baltistan (GB) government opened the old Bungalow Babusar Track near Babusar Top in the Diamer district. For the first time since 1960, the 3 km track has been fixed up.

According to reports, the new route will link the River Kunhar to the River Indus. Along the route, there will be shops, hotels, and restaurants. Deputy Commissioner (DC) Diamer Fayyaz Ahmed and the elders from the area were at the opening ceremony. Mr. Ahmed said at the opening ceremony that when the Bungalow Babusar Track opens, tourists will be able to visit the historic APA House, the Old Bungalow Bazaar, and other tourist spots in the area. This will also help the area’s economy because more and more tourists will come to visit.

He also said that Babusar is a popular place for tourists and that a lot of locals and tourists pass through it every day. When a new route opens, it will make tourism even better. He said that the Khyber Pakhtunkhwa and Great Britain governments want to boost the tourism industry and improve infrastructure, which is why tourism is growing right now.

Also, travellers and tourists should know that the federal government has started building a tunnel to connect KP and GB during the winter months.