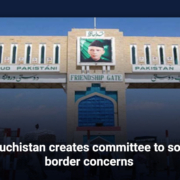 Baluchistan creates committee to solve border concerns. According to the Baluchistan Home and Tribal Affairs Department statement, a senior civil and military officials committee has been constituted to resolve fundamental problems relating to cross-border movement at the Chaman-Spin Boldak gate.

The Taliban said traders, patients, and passengers were having problems, but Pakistan was “unwilling to fix problems” despite their attempts.

It was formed to “resolve concerns about cross-border movement” at the Chaman-Spin Boldak crossing, the Balochistan Home and Tribal Affairs Department announced on October 18.

According to the notification, the committee will be led by the Balochistan Home Department’s additional chief secretary. There are representatives of Inter-Services Intelligence (ISI), National Logistics Cell (NLC), Customs Collectorate (CC) and National Database and Regulatory Authority (NDRA) as well as co-opted members.

The closing of the Pak-Afghan border at Chaman, and cross-border movements. It will also consider the impact on Afghan Transit Trade and other factors.

A committee member told Dawn.com that representatives from Pakistan and Afghanistan met today to discuss reopening the border. No specifics regarding the meeting were immediately available.

The Chaman-Spin Boldak border blockade has harmed Afghan pomegranate producers whose fruit is ready for export to Pakistan.

Except for apples, Pakistan has reduced its duties on fresh Afghan fruit.

Torkham
Despite this, the Torkham border crossing remains restricted to Afghans with valid visas. Pakistan halted the bridge in May due to fears about Covid-19 distribution.

For the Torkham border crossing, Shehzad Arbab, the prime minister’s special assistant for the Establishment Division, announced earlier on September 29 that Prime Minister Imran Khan has directed to stop issuing permission letters and allow access with valid visas. But the decision hasn’t been executed.

According to Ambassador Mansoor Ahmad Khan, since the Taliban took over on August 15, the Pakistani embassy in Kabul has issued roughly 16,000 visas to Afghans. The bulk of Afghans who received permits were stranded owing to the shutdown of the Torkham border crossing.

In addition, Pakistani and Afghan airlines have halted flights between the two countries due to exorbitant fares.