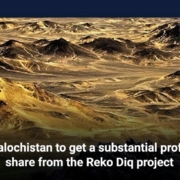 Read more with EL news : The CDA would expedite work on the Islamabad Expressway

The minister indicated, according to sources, that the federal government acquired interests in a company that had abandoned the project at the request of the provincial administration. The additional shares will be transferred to the Baluchistan government prior to the start of construction. Additionally, the project’s contractors have been directed to invest PKR 40 billion in public infrastructure and community development activities on the project’s Reko Diq site. The funds will be spent prior to the project’s start.