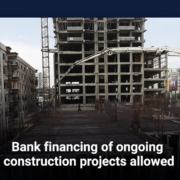 According to the SBP, banks are currently hesitant to provide such bank financing, limiting home buyers’ options for funding of completed units. “The SBP’s new guidelines provide a comprehensive framework with appropriate risk mitigation measures for the banking industry to support this area of housing finance,” the statement continued.

Essentially, bank financing risk will be mitigated by mortgages secured against project land under special agreements with builders. “Payments to builders will be made via a specifically formed account (referred to as an escrow account) with no direct access to the seller until the completion of building milestones agreed upon between financing banks and builders,” the SBP stated.

The SBP stated that purchasers of housing units who finance their purchase would be able to take advantage of several perks, including access to housing units in under-construction projects at a lower cost than entirely constructed ones. While housing units are new, the banks’ rigorous monitoring and management will ensure that they are completed on time and that purchasers receive possession. For the first few years, purchasers may incur reduced maintenance and renovation costs.

“These benefits are projected to incentivize the purchase of pre-construction housing, resulting in increased demand for the construction industry,” the SBP stated.

In comparison to completed projects, banks are hesitant to lend money to acquire housing units in under-construction developments. Therefore, the typical market practice is for builders to allow purchasers of housing units to make periodic payments against allotment letters once the building begins, which is a handy way to facilitate homeownership.

Banks, on the other side, do not lend based on allotment letters. As a result, buyers cannot obtain mortgage financing from banks, preventing them from purchasing affordable housing units during the under-construction phase of developments.

Additionally, builders claim that the inability of banks to finance home projects currently under construction diminishes demand and slows the creation of new projects. The SBP stated that it would address such issues with increased funds following the publication of these recommendations.

THE STATEMENT NOTED THAT the SBP guidelines represent a significant step forward and are consistent with the State Bank’s continuous efforts to stimulate economic development through the encouragement of activities in the housing and construction sectors. Bank financing of ongoing construction projects allowed by SBP.

“It is anticipated that banks’ housing finance would expand significantly in the coming years. Apart from enabling borrowers to access housing loans under the ‘Mera Pakistan Mera Ghar’ scheme for under-construction projects, this will also assist builders in increasing the stock of new apartments or flats across the country,” the SBP stated.