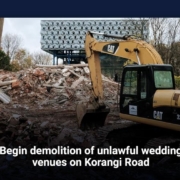 On Monday, the Supreme Court told the city administration to demolish a lot of wedding halls that were built illegally on Korangi Road, so they did.

A government official said that there were more than 40 wedding halls to be demolished because of the Supreme Court’s order. The operation would go on until the job was done.

The Supreme Court demolished wedding halls in January because they were built on land that was meant for residential use only, the court said.

The supreme court told the owners of marriage halls that their applications would not be heard and that the land should be used for residential purposes again.

It used to be that a group of people from the Supreme Court of Pakistan, led by then-chief justice Gulzar Ahmed, had told the Karachi commissioner to tear down the illegal wedding halls.