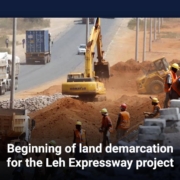 According to a senior RDA official, a joint team comprised of the District Land Revenue Department members and the RDA’s land and engineering branches had been formed. It had begun work marking land to be acquired for the project.

Read more with EL news : The center will initiate development projects in 14 districts of Sindh

He stated that Leh Nullah was divided into city and cantonment areas, and the team would complete the first phase of demarcation of cantonment land. He noted that the team would identify land within the Rawalpindi Municipal Corporation’s jurisdiction in the second phase.

“The Rawalpindi Municipal Waste Company transfer station in Liaquat Bagh will also be impacted by the project and will be relocated,” he said, adding that the RDA had requested estimates from all civic bodies.

Cantonment land will be marked in the first phase, according to an RDA official.

According to him, the law requires Rawalpindi and Chaklala cantonment boards to inform residents about their areas and obtain approval from Military Lands and Cantonments for military land.

He stated that the provincial government would pay for structures on leased property in cantonment areas but not for land along the Leh Nullah.

On the other hand, RDA requested that the Water and Sanitation Agency (Wasa) relocate its supply lines and tubewells along Leh Nullah and that Wasa conduct a survey of the area following land demarcation.

Wasa had installed over two dozen tube wells along Leh Nullah from New Kattarian to the Lahore High Court Rawalpindi bench building near the Soan River. It would receive time and funding from the government and that supply lines would be relocated following the installation of new tube wells.

Another RDA official stated that following land demarcation, civic bodies would submit information about land prices and government structures; the district administration would then verify the information through land records, at which point it would become part of the PC-I.

He added that the price committee would also set land rates along the nullah and inform residents about land rates in various areas.

He added that the process would take a month to complete, at which point the land acquisition process would begin. Private landowners would also be contacted, and the RDA has already contacted house owners along the nullah in this regard.

When contacted, RDA Director Anwar Baran stated that the final assessment would occur once demarcation was completed.