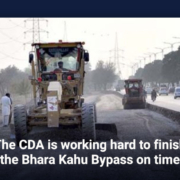 News sources said on August 29 that the Capital Development Authority (CDA) is doing everything it can to finish the Bhara Kahu Bypass project as soon as possible. Capt. (ret.) Mohammad Usman, who is the chairman of the CDA, has put together special teams to keep an eye on the project and get it done quickly.

The chairman met with Prime Minister Shehbaz Sharif, who told the CDA administration to do everything they can to finish the project in the next four months. The chairman told the prime minister that the government had started a survey of the route’s topography, which would be done in the next few days. After the survey is done, the CDA will finish the engineering design for the bypass before finalising Project Concept-I. (PC-I).

A spokesperson for the CDA told the media that PM Shehbaz Sharif is in charge of the project himself. The authority has already teamed up with the Frontier Work Organisation (FWO), and construction is set to start in the second week of September.

It’s important to know that the PKR 5 billion project is one of the city’s most important projects to improve road infrastructure. According to its PC-I, the bypass would be five kilometres long, with a one-kilometer-long elevated road (flyover) and two interchanges, one at the beginning and one at the end.

The route will start at the Quaid-i-Azam University stop on Murree Road, go along Kayani Road, and end near the Jugi stop on Murree Road. After that, it will have a flyover that is one kilometre long and ends at the end of Bhara Kahu.