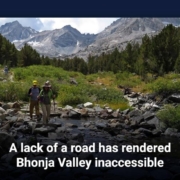 Bhonja Valley is isolated due to the lack of a road. Without the basic infrastructure and a suitable road, the picturesque Bhonja Valley, located near the renowned Kaghan Valley, remains an unreachable tourist destination, but one with significant potential.

However, getting to the village of Bhonja is an uphill battle in and of itself, as the present road is in disrepair and a huge turnoff for potential tourists.

Read more with EL news : Progress on a critical RIUT project has reached a halt

Syed Ahmed Hussain Shah and Saleh Muhammad Khan, the constituency’s elected members, have yet to follow through on their promise to create a bridge and a proper road for Bhonja Valley.

A bridge that was previously constructed in partnership with international organizations was destroyed by repeated ground sliding. The majority of the structure collapses and washes into the river below. Residents periodically steal the bridge’s exposed plates.

Hundreds of thousands of rupees have reportedly been spent on the rehabilitation of the bridge. Still, there is the little visible trace of reconstruction, and no attempt has been taken to regulate the frequency and intensity of land sliding.

Former Nazim Bhonja Ilyas Ahmed stated that while nature has endowed the valley with unsurpassed beauty, the local elected officials’ apathy has rendered Bhonja virtually invisible on the tourism radar.

Ilyas stated that he had asked the provincial government to keep Bhonja Valley in mind while it searches for and develops new tourism destinations.

Meanwhile, Provincial Assembly Member and Special Advisor to Chief Minister Syed Ahmed Hussain Shah has claimed to have allotted Rs20 million to repair and build the necessary bridge and road.

He stated that construction on the project is likely to begin shortly. Bhonja Valley, like all other tourist destinations in the Kaghan Valley, will soon begin receiving its fair share of tourists and travel enthusiasts.