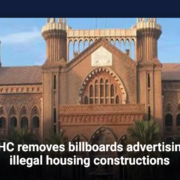 The Lahore High Court (LHC) has given the city government until July 14 to get rid of the billboards in the city that promote housing projects that haven’t been approved. The LHC has told billboards advertising illegal housing plans to be taken down within a week.

LHC Justice Shahid Jamil gave the order while he was presiding over a petition that said billboards advertising illegal and unregistered housing schemes lead people who don’t know about them to invest in these projects. He said that this kind of investment causes property buyers to lose a lot of money.

After hearing both sides, the court said that outdoor ads in Lahore had to be taken down. During the court case, the Director General of the Parks and Horticulture Authority (PHA), Omar Jahangir, said that the authority has the right to take down these signs. Based on this confirmation, the court has given the city a week to get rid of these billboards.