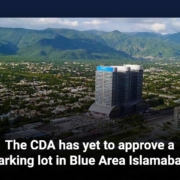 Blue Area, one of the city’s most important places for business, hasn’t had enough parking for a long time, and people have been complaining. There was a multi-story parking lot in the area built by a company called National Logistics Cell (NLC) in December of last year.

Sources say that the bid acceptance letter was sent out in January, but the authority hasn’t yet sent out a letter confirming that construction will start soon enough. “We agree that the letter of start hasn’t come out yet.” CDA engineering official: “There was a little problem with the design, which has been fixed, and it will be out in the next few days.” This is what they said.

It was given to NLC in December last year.

The National Logistic Cell (NLC) won the contract because they put in the lowest bid of Rs1,274.5 million, says the CDA. The car park will be built near Savour Foods on Jinnah Avenue in the Blue Area.

According to a person in charge, work would start on the parking lot in a year’s time.

It’s important to remember that a few years ago, the CDA said that it would build six parking plazas in different parts of the city. There would be three in the Blue Area, one near Centaurus Mall, one in F-8 Markaz, two in F-10 Markaz, and one in Karachi Company and I-8 Markaz.

One of the CDA’s officers said that the engineering wing had been working on the cost estimates for three other plazas. At some point, the civic agency would also start the tendering process for those plazas. This is what the officer said:

This happened before, in 2016. The Islamabad Traffic Police told the city’s government that there were not enough parking spaces in commercial areas like the Blue Area and F-8 Markaz, where the city’s district courts are.

As far back as a few years ago, the CDA had planned to build five park-and-ride plazas. The plan hasn’t come to fruition. Those who work for the CDA say that the civic agency’s board also approved the project in 2015.

Instead of building multi-story parking plazas, the CDA built two underground parking spaces in Jinnah Super Market. These parking spaces could not be used properly, even though millions of rupees were spent on their construction.