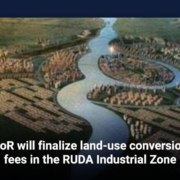 Lahore: According to news reported on August 3, the Board of Revenue (BoR) would evaluate and determine the rates for land-use conversion in the industrial zone under the purview of the Ravi Riverfront Urban Development Project (RRUDP). The owners of industrial units will be able to alter the status of their units from “agricultural” to “industrial or commercial” by paying the necessary fee after the BoR determines the land-use conversion rates.

According to the information, the RUDA industrial zone covers a total area of 7,300 acres, of which 2,500 acres are home to 800 industrial facilities producing steel, pipes, aluminium, and other materials. On the remaining 4,800 acres of land, it was claimed that RUDA intends to build an industrial estate with the help of the business community. The area where industrial units are located is classified as agricultural, according to Mian Kamran, senior vice chairman of the Ravi Industrial Estate Association. He continued by saying that RUDA has made the decision to change the land’s classification to either industrial or commercial. The group also requested that RUDA apply land-use conversion fees based on the DC rate for agricultural land. RUDA has requested that the BoR finalise the fees for land usage in the industrial zone, nevertheless.