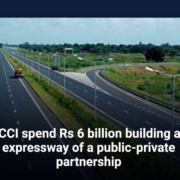 GCCI would spend Rs6 billion building an expressway as part of a public-private partnership.
The Gujranwala Chamber of Commerce and Industry (GCCI) has presented an unsolicited proposal to the Punjab government to develop a 16-kilometer-long link road connecting the industrial city to the Sialkot-Lahore highway (M-11).

The route connecting Gujranwala city to the highway is intended as a public-private partnership (PPP) project. The town lacks a direct expressway connection to any of the region’s motorways.

The GCCI had previously expressed to Punjab Chief Minister Usman Buzdar the chamber’s desire to invest in the connecting road. The province government granted the plan the green light.

According to GCCI President Umar Ashraf Mughal, the local business community will invest approximately Rs6 billion in constructing the dual and walled carriageway. At the same time, the provincial government will donate land for the project for Rs900 million.

Due to the PPP nature of the project’s execution, a firm comprised of Gujranwala people in business has been registered. Mr. Mughal stated that the company recently signed an agreement with another firm according to legal requirements. The unsolicited proposal under section (26) of the Punjab Public-Private Partnership Act, 2019, was submitted to the Punjab PPP authority’s chief executive officer on Sept 20 last.

He added that copies of the unsolicited proposal had been forwarded to government ministries such as Planning and Development (P&D) and Works and Communication (C&W) for further action. The GCCI was committed to completing the project.

According to the PPP model, the investor company may be entitled to all commercial rights associated with the project, including toll collection. For a minimum of 27 to 30 years, the M-11 extension project between Sambrial and Kharian is also being implemented via the PPP model by the Frontier Works Organization (FWO) under the National Highways Authority (NHA). Federal Minister Fawad Chaudhry has also announced the November inauguration of the Kharian-Islamabad expressway, which will save an hour off the travel time between Lahore and Islamabad.