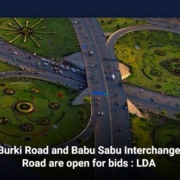 According to the article, three firms competed for the PKR 240 million Babu Sabu project, with Yasin & Brothers bidding 1% less than the projected amount. Similarly, Highways Construction won the PKR 400 million Burki Road dualization project by tendering at a 1% discount. In exchange for financial delivery, both projects were given a six-month timeframe.

It is worth noting that the LDA requested prequalification bids in September for the dualization of Burki Road between the Lahore School of Economics (LSE) and the BRB and the construction of roads on both sides of the Babu Sabu intersection.

According to Nawaf Al-Malki, Saudi Arabia will soon deliver cash assistance to Pakistan.

On November 2, seven enterprises were first qualified for the PKR 400 million Burki Road infrastructure project, while four firms were initially qualified for the PKR 242.7 million Babu Sabu Road construction project. Now that the firms have been awarded the tender, the project will be completed within the next six months.