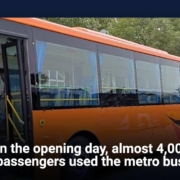 Over 4,000 people used the free bus service in Ramazan on the first day it was open. Another bus service between Rawat and Faizabad, called the “Blue Line,” is also in the works. It could start in a few months.

PML-N leaders, including Marriyum Aurangzeb, Hanif Abbasi, Dr Tariq Fazal Chaudhry, Anjum Aqeel, former Mayor Sheikh Anser Aziz, and Chinese diplomats, were there when the service was opened. The PM also took a bus ride and looked at the development and repair work done in the last four days.

A bus would go from Peshawar Mor to the N-5 station every five minutes, said the head of the CDA (Chungi No 26). Passengers going to the airport will be served by four buses that can also carry their luggage. Each of these four buses will leave the station at Peshawar Mor after about 25 minutes of not seeing each other.

By next month, China will send 10 buses to Rawat and Faizabad. They will be used to get people from Rawat to Faizabad.

The head of the CDA also said that a fleet of 30 buses would be coming from China next month. Out of those, 10 would be used to go from Rawat to Faizabad.

In a meeting on Monday, Prime Minister Shehbaz Sharif talks to people who work for the metro bus service — The White Star
A few days ago, the prime minister told the civic agency to start the bus service in a few days. The CDA, after finishing work on war footing, also took 15 buses from the Rawalpindi-Islamabad Metro Bus Service. These will be sent back when the buses from China arrive next month.

He thanked Nawaz Sharif, the former prime minister of Pakistan, for setting up the project for the people of Islamabad in 2017.

He was told that there was a Rs20 million fund for the development of horticulture along the metro track that was not being used. However, now that the CDA has the money, they will use it right.

He thanked the chairman of the CDA and his team and other officials from other groups, like the NHA, for their efforts to get the bus service up and running in just four days. The premier also told the CDA to look into whether or not metro buses could be used on the Bhara Kahu-Peshawar Mor and Rawat routes.

When the PML-N government took office in 2017, work began on a 25.6-mile metro bus track worth $16 billion. It was supposed to be done in a year. But when the government changed in 2018, the project took a long time.

Project: The National Highway Authority (NHA) was in charge of the project. The CDA took it over last year and started the process of buying buses and setting up ticket and command systems.

A few months ago, the CDA ordered a company from outside China to make 30 buses in China. The buses were supposed to arrive in Islamabad last month for the project to open on March 23. They didn’t make it in time.

They could not be sent to Pakistan because of the Covid-19 cases in Shanghai. They are now expected to arrive in Karachi on May 5, though. However, the CDA set up 15 buses from the Rawalpindi-Islamabad Metro Bus Service to run on the airport route as a stop-gap measure.

During the first day he was in charge, he told the CDA to start working on a new service in five days. There have been a lot of people working for the CDA, the NHA, and other groups since then to get the service going.