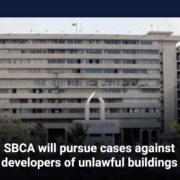 According to our sources, the Sindh High Court (SHC) issued an order on Tuesday, December 14th, directing the Sindh Building Control Authority (SBCA) to file proceedings against the builders and architects of newly constructed buildings in the city that are considered illegal.

Furthermore, the court requested that the approval for building granted by the SBCA in the year 2019 be entered into the record. In addition, the authority’s Deputy Director produced a compliance report detailing any illegal buildings in Nazimabad that were discovered. There is a fourth-story structure that was illegally constructed, and it has been ordered to disconnect all of the utilities that are connected to it.

Read more: The SBCA, HAD, and HMC relevant authorities have been summoned for the plot conversion process.

According to two benched judges, Syed Mehboob Hashmi was granted permission to study the report in 2019, although he passed away in 1989, which is when the report was issued. The court also ordered that harsh action be taken against those who violated the rules.