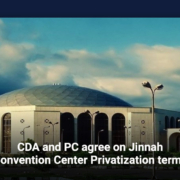 According to reports, the agreement on the eagerly anticipated transaction model was finalised during a meeting between CDA Chairman Amer Ali Ahmad and Minister for Privatization Abid Hussain Bhayo. As per the agreed-upon terms, CDA would carry out new feasibility studies that would take into account important issues given the location of the center and would also include an evaluation of the project’s environmental impact. The redesigned transaction structure for the project would, according to both members, be created to retain investor convenience while upholding openness. Notably, the govt has placed up for auction JCC, one of Islamabad’s largest state-owned real estate companies. It is one of Islamabad’s largest state-owned real estate companies by government to put up for sale which is JCC. It will be auctioned with a long list of other state-owned enterprises (SOEs) to raise money for government operations and cut down on the costs sustained by running these SOEs.