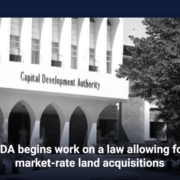 CDA begins work on a law allowing for market-rate land acquisition. They have set up a nine-person committee to change the Capital Development Authority’s (CDA) Ordinance of 1960 to ensure land acquisitions are done at market prices.

In the proposed changes, people who lost land to the CDA will get compensation based on the market value of their land, which an assessment committee will figure out for them.

In light of the decision made by the federal cabinet in November of last year, the CDA was also not allowed to make any more land acquisitions that had to be done for free.

Taking this first step will help the agency follow cabinet orders, which also say the agency can’t do any more land acquisitions by force,

After making changes to the CDA ordinance, the committee will write a bill sent to the parliament for final approval.

Documents say that Sections 2, 12, and 32 of the CDA ordinance will be changed.

This is what a source told me: Some decisions made by the federal cabinet couldn’t be put into place until the CDA ordinance had been changed. So, the civic agency will finish the changes to the law before sending them to parliament for approval.

At the same meeting, the cabinet had called for sector E-12, which the government bought in the ’80s. In 1989, the CDA sold plots to more than 4,000 people, mostly government employees, but 32 years later, this sector hasn’t grown.

Sources say many of the people who were given allotment letters died while they were waiting to get their promised plots.

It is another reason why the CDA hasn’t grown the sector. It can’t get the land from local landlords.

However, a CDA official told Dawn that the lack of development in sector E-12 would be solved because the CDA had already won the contract for its development, and work was already going on.

The officer said that the long-running dispute between the local villagers in E-12 and the CDA was also nearing an end because the CDA recently gave more than 150 plots to the villagers through balloting. Soon, the remaining villagers will also get plots, which will speed up development work in the area.