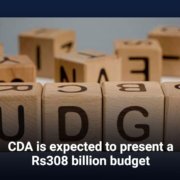 A record surplus budget of Rs308 billion is expected to be announced by the Capital Development Authority (CDA) for the fiscal year 2022-23. This would be a record.

This will be the first time that the budget of the CDA will not be based on the money that they get from auctions. Auctions have only been suggested to keep commercial space in the city available at all times. When it comes to income and expenses, it’s the first time in the history of the CDA that they aren’t based on auctions. For the first time, it has been said that the CDA sells plots and pays salaries.

Read more with EL news : Balloting at West Marina scheduled for May 16th, 2022

The board of the CDA was told on Thursday that the revised estimates for 2021-22 still show that the government will have a surplus of almost $68 billion at the end. Then, for 2022-23, the figure is Rs308 billion. The main source is the CDA’s projects that make money.

At the meeting, there was a presentation on the CDA’s income and expenses for 2022-23, which was on the list of things to talk about. Section 43 of the CDA ordinance says that this has to be done in February every year. Today, the same thing has been sent in.

In 2021-22, the CDA spent the most money on development, and the proposed plan is to spend about 80% of the money on development and only 20% on recurring costs. This is a complete change from the inefficient trends that have been linked to budgets that are mostly used for non-development.