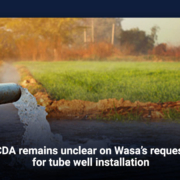 The MNA from Rawalpindi wrote a letter and asked for permission to set up tube wells in Islamabad.
People in the civic group say they should make a choice based on what the capital needs.
ISLAMABAD: The Water and Sanitation Agency (Wasa) has asked the Capital Development Authority (CDA) to let it install tube wells in the federal capital’s jurisdiction for the people of Rawalpindi. This is because Interior Minister Sheikh Rashid Ahmed’s nephew backs the agency.

Sheikh Rashid Shafique, a member of the National Assembly (MNA), wrote a letter to the city’s civic agency, asking it to let Wasa install tube wells in its area to meet the water needs of the people of Rawalpindi. The civic agency has his support.

It’s already running low on water, and the ground water level has been dropping quickly in Islamabad. Wasa wants to set up 15 tube wells in the city, which is already having problems.

Do you know that Wasa has asked us to install tube wells in Islamabad? It’s not like we’ve made a decision so far, says a spokesperson for the CDA, Syed Asif Raza.

“We’ll make a decision that takes our own needs into account first,” Mr Raza told the crowd.

Even though a final decision had not yet been made, Islamabad’s civic body’s water directorate and planning wing said that the city was already in crisis with water.

The CDA is part of the interior ministry, which is led by Sheikh Rashid Ahmed, who was elected from the NA-62 constituency in Rawalpindi. The CDA is part of the ministry, which is led by Ahmed. His nephew, Sheikh Rashid Shafique, is also a member of parliament. He used to live in the garrison city’s NA-60 constituency, but he moved back to the city.

Some people say that in 2015-16, the CDA let 23 tube wells from Wasa be built on the service road west of the expressway in Islamabad. Later, when the capital’s water table was quickly depleting, the CDA regretted it.

Officials from the CDA said that the city had grown a lot, there had been a lot more people, and the water table was quickly going down. This put the civic agency in a difficult situation.

On December 24, 2021, Sheikh Rashid Shafique wrote: “With reference to the letter mentioned above, it is stated that the subject matter is urgent in nature and a site plan showing the locations has already been sent to the town planner of the Planning Wing of the Planning Wing CDA Islamabad,” he wrote.

“Also, a part of the funds have been released so that the project can start right away,” Shafique said, asking the CDA to give the project a “No-Objection Certificate.”

It was last year that the Pakistan Council for Research in Water Resources (PCRWR) and the Pakistan Development Authority (PDA) signed a Memorandum of Understanding (MoU) to improve the water table by building 150 recharging wells to store rainwater. This will help the water table rise.

Last few decades, the civic agency could not bring in water from anywhere else except for two million gallons from Rawal Dam, which it brought back after more than two decades.

From three primary sources: Simply Dam, Khanpur Dam, and tube wells, the CDA gets 60 to 70 mgd of water now, but it needs 220 mgd, according to a study by the CDA. This is because the CDA doesn’t have enough water. Rawalpindi, too, is suffering from a lack of water.

When the proposed Ghazi Barotha project is done, both Rawalpindi and Islamabad will get 100 mgd each.

When the Senate asked Shehryar Afridi for a written response, he said that the groundwater level in the capital had dropped five times in the last five years.

A 6ft drop in groundwater level was seen in 2013, a 10ft drop in 2014, and 16ft, 23ft, and 30ft drops up to 2017. He said that the groundwater level in Islamabad was dropping because people and businesses were pumping a lot of water to meet their needs and because there had been less rain than usual.