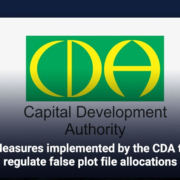 Measures implemented by the CDA to regulate false plot file allocations. A news article from May 10 says that the Capital Development Authority (CDA) has agreed to move and upload all plot allocation paperwork to the National Radio and Telecommunication Corporation (NRTC) system after May 16. The number of false plot file allotments should go down with this change.

Several years ago, the CDA’s branch that deals with landowners whose land is taken by the city and who are entitled to other plots was looked into for making up allotment cases. The Federal Bureau of Investigation is looking into these cases (FIA).

Read more with EL news : No new project will be launched in Punjab during the current fiscal year

A CDA official from the information technology wing said that the authority has decided to move all cases from the information technology wing and the estate management wing to the NRTC system. As a result, all CDA employees will be able to find and look at all plot files. In addition, applicants will get a tracking number that they can use to find out where their files are in the process.

Also, the official said that if this plan works, there will be a lot less chance of fake and phoney allotments. The CDA also said this in a statement, saying that all cases involving citizens whose land had been taken by the authority would be sent to the NRTC, with regular updates on how each case would be uploaded. No file, new or old, will be moved without being put into the NRTC system first.