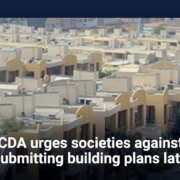 The Capital Development Authority (CDA) in Islamabad has told all private societies not to wait too long to submit building plans for approval so that they can get a completion certificate. This was reported by news sources on August 30.

Read more with EL news: The CDA is working hard to finish the Bhara Kahu Bypass on time

The CDA Building Control Directorate has told societies that if they don’t act quickly, they will be fined and punished. Nasir Jameel Butt, the director of Building Control for the North, told the media that the authority will soon start a crackdown on buildings that haven’t gotten official approvals and completion certificates (permission to occupy) from the CDA within three months of the end of the initial construction period. He also said that the CDA plans to get the fine and costs of approval back from societies that haven’t given the CDA their records.

It’s important to know that the CDA has changed the way it approves projects and set up two separate directorates to oversee construction in the city. The new directorates would be in charge of commercial and residential building laws and give buildings and houses completion certificates. According to the rules, the authority can fine homes up to PKR 5,000 per month and businesses up to PKR 10,000 per month if they don’t get approval on time.