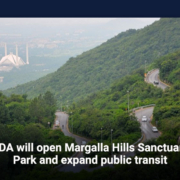 News sources said that the Capital Development Authority (CDA) gave the go-ahead to build Margalla Hills Sanctuary Park on Wednesday, August 3. The Islamabad Wildlife Management Board will run and take care of the park (IWMD). During the 58th meeting of the CDA Development Working Group (DWP), which was led by Chairman Amir Ali Ahmad, the park was given the final go-ahead.

The Planning Commission (PC) of Pakistan had some concerns about the park’s location and how it would affect the environment, but those concerns have been taken care of. People say that the park is necessary to protect the local plants and animals of the Margalla Hills, which have been hurt by the growing number of people living there. During the same meeting, the CDA also approved a budget of PKR 7.2 billion for the Islamabad Bus Service Project. Under the plans that were approved, the CDA will add eight more bus routes in the city. It’s important to know that the CDA is working hard to build a good public transportation system, which hasn’t existed for decades. At the moment, there are four ways to get around the city: the Blue and Green Lines, the Orange Metro Bus, and the Islamabad-Rawalpindi Metro Bus.