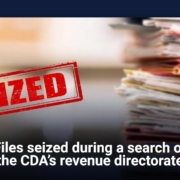 Files seized during a search of the CDA’s revenue directorate. On Thursday, there were raids by security officers from the Capital Development Authority (CDA). They took a lot of files from the revenue department at Iqbal Hall.

Sources say that the raid was done at the request of the CDA management, which had heard that some patwaris were taking too long to decide the fate of files.

The sources also claimed that the patwaris used delaying tactics to get bribes from the people who live there.

“Yes, there was a raid on Thursday, and after we look over the records, we will be able to say something.” If there is an unusual amount of time between when a file is submitted and approved, “we will take action against the people who did not do their job.”

In what he said, he said some people had complained that their files were being deliberately ignored by the police. Files were held up because of objections that were not relevant.

The CDA’s management had told them to take the files. An officer said to me that there would be a lot of punishment for revenue officials and patwaris who do bad things if they are found out.