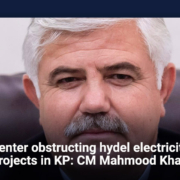 PESHAWAR: Mahmood Khan, the chief minister of Khyber Pakhtunkhwa, called the ruling coalition in the center a “mafia” on Friday. He also said that the policies of the “imported” government were making it hard to start hydropower projects within the province.

“Until this mafia is in power [in the center, no one will be able to promote clean and green energy in KP,” Mr. Mahmood told the assembly in a speech about the provincial budget for the financial year 2022-23, after the Rs1.33 trillion budget, including a Rs418 billion development outlay, was approved.

Ikhtiar Wali, a member of the Pakistan Muslim League-Nawaz, tried to stop the leader of the house from speaking, even though the chair warned him several times not to.

Calls the ruling coalition in the center a “mafia”; PA passes a budget for Rs1.33 trillion

Mahmood Jan, who was in charge of the meeting, told him to stay calm and listen to what the chief minister had to say.

He told the PML-N lawmaker, “I warn you under Section 227 of the provincial assembly rules and business not to leave your seat.”

When Mr. Wali kept protesting, the chair called for the sergeant-at-arms and told him to kick the MPA out of the house.

The chair also said that opposition members couldn’t come in for two days, on Monday and Tuesday.

Other people in the opposition did not show support for him, and they did not walk out.

Before the meeting began, members of the government and the opposition came to an agreement to pass the budget.

The food minister, Atif Khan, called the leader of the opposition, Akram Khan Durrani, and asked him to pull all cut motions so that the budget could be passed quickly.

The Finance Bill for 2022 was also passed by the house.

The PML-N and the Pakistan Peoples Party have been in power for the last 40 years, the chief minister said.

He said that since Independence, the International Monetary Fund had given Pakistan a total of 23 packages. However, the current “imported” federal government blamed the last PTI government for the terrible state of the country’s economy.

“Unfortunately, they [federal government] blame us [PTI] for their failures,” he said, adding that former prime minister Imran Khan turned the country around when it was about to go bankrupt.

When the PTI government was thrown out, Mr. Mahmood said, the country’s GDP growth rate was 6%.

“Prime Minister Imran Khan’s government was overthrown because of its independent foreign policy, his brave stance at the UN on Islamophobia and the Kashmir cause, initiatives to help the poor, and a record rise in money sent home from abroad,” he said.

The chief minister said that the “imported” policies of the government were to blame for the visible drop in the value of the rupee against the dollar, “unbearable” power outages, and record inflation.

He said that the federal government had raised the price of electricity by Rs5.27 per unit and was planning to make people’s lives even worse by putting in place a fixed tax system.

Mr. Mahmood said that big projects in KP were being left out of the federal Public Sector Development Program. He said that the center cut Rs21 billion from ex-budget. Fata’s

“If you can’t run the country, why did you challenge us in the first place? “The government that was brought in wants an NRO for itself,” he said.

The province’s chief minister said that memorandums of understanding (MoUs) had been signed with South Korea, China, and other countries to start hydroelectric projects there.

He also said that Chitral, Bannu, Kohat, and other parts of the provinces would get their own industrial zones.

Before the opposition benches pulled their budget cut motions, they gave the government ideas for how to improve the police, health, education, energy, food, and other areas.

Sardar Hussain Babak, a member of the Awami National Party, asked the government to give security in the province to the police and civil administration when he talked about his cut motion. He said that the police were able and able to stop terrorism.

Mr. Durrani asked the government to pay the contractors the Rs40 billion they were owed.

He said that the contractors would not take part in the bidding process next month if the government did not raise their prices because the prices of building materials had recently gone up.