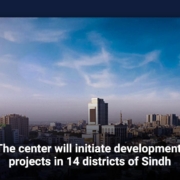 The center will initiate development projects in 14 districts of Sindh. The PM claims that previous governments overlooked the province’s growth. Federal ministers blame provincial governments for food inflation. • According to a PPP spokesperson, Sindh is the only province that provides free cancer, heart, and renal therapy.

The federal government condemned the Sindh government on Friday for ‘bad administration,’ with ministers blaming it for the country’s food inflation, as Prime Minister Imran Khan claimed the Centre would elevate 14 districts under the Rs444 billion Sindh Development Plan.

Khusro Bakhtiyar, Minister for Food Security, stated Sindh was a hotbed of fertiliser hoarders. At the same time, Farrukh Habib, Minister of State for Information, and Usman Dar, Special Assistant to the Prime Minister on Youth Affairs, slammed the Sindh government for food inflation during a news conference.

While presiding over a conference to examine the development plan’s implementation, the prime minister stated that the federal government would prioritise 14 Sindh districts.

Mr Khan stated that the purpose was to improve the province’s citizens’ socioeconomic position. To promote prosperity, he commanded that attention be given to Sindh’s less developed and rural areas. He expressed remorse that previous governments had neglected Sindh’s development.

While emphasizing the importance of transparency, quality work, and timeliness in implementing the development plan, the Prime Minister directed relevant departments to expedite work on the Hyderabad-Sukkur Motorway and the construction of sports complexes Badin, Ghotki, Thar, Mirpurkhas, Tando Mohammad Khan, Hyderabad, and Sanghar.

For fiscal year 2021-22, the government approved 26 new PSDP projects and allotted budgetary resources. The Planning Commission had approved Rs16.304 billion for eight departments and organizations of the federal government.

Meanwhile, the state minister for information accused the Sindh government of the country’s rising food inflation, claiming that the “Sindh administration has abandoned the province’s people to mafias.”

He stated that when the price of sugar increased to Rs150 per kilo, the Sindh government ceased providing sugar cane to mills and then prohibited sugar stocks from reaching the markets. He stated that food and grocery prices in Sindh remained higher than in other regions.

Faisal Karim Kundi, a PPP spokesman, responded to the criticism by asking, “Why is Imran Khan so concerned about Sindh?”

He said that it was the only province where cancer, heart disease, liver and renal disease were all treated for free.

Mr Kundi stated that it also housed the country’s largest trauma centre. “If nothing is being done in Sindh, then why do people fly from all across the country to receive free medical treatment?” he inquired.