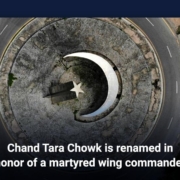 The late wing commander gave his life on March 11, 2020, while flying an F-16 during the Pakistan Day parade practice. The Senate passed the resolution last month. The Senate Secretariat transmitted the resolution to the Interior Ministry and Capital Development Authority (CDA) for review and approval.

Read more with EL news : LDA devised a novel method for the quality of construction materials

The memorial will be built by either the Pakistan Air Force (PAF) or the CDA following clearance by the CDA. Although the CDA will decide, there is no obligation to demolish the Chand Tara because a new monument can be created near the chowk. Nonetheless, it would be deleted if necessary.

According to a CDA officer, the pilot did not eject until the very last moment and after guiding the craft away from the metropolitan area. However, he tragically lost his jet and his life in the endeavor. He gave up his life to save the lives of several others.

It is proposed that the aeroplane replica be placed at the monument site as well.