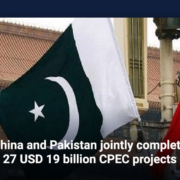 Islamabad: As part of the China-Pakistan-Economic-Corridor (CPEC), the governments of Pakistan and China have finished 27 projects worth a total of USD 19 billion. This was reported by news sources on September 13.

Read more with EL news: The property tax rate is set at 1% in Punjab

The projects were finished with the help of joint ventures (JVs) and direct investments from the Chinese government in the development of the port of Gwadar, the building of roads, energy corridors, and the growth of agriculture. A report by China Three Gorges South Asia Investment Ltd (CSAIL) called “Overview of Pakistan’s Power Sector and its Future Outlook” says that by 2030, another 63 projects with a total cost of USD 35,2 billion will be finished. The report says that 27 projects that will cost a total of USD 7.7 billion are in the planning stages and should be finished by 2025. There are 36 more projects in the works, which are expected to be done by 2030 and will cost an estimated USD 27.5 billion. The report says that the following projects have been finished in different fields: