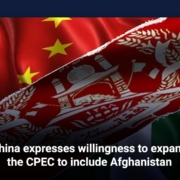 Kabul: China welcomes Afghanistan’s participation in the Belt and Road Initiative, a global infrastructure plan proposed by China. China is willing to push for the CPEC to be extended to Afghanistan, Chinese Foreign Minister Wang Yi said on Thursday as he made a surprise visit to Kabul.

According to a statement from an Afghan foreign ministry spokesman, people from both countries talked about how to improve their political and economic ties, including how to start mining and how Afghanistan might be able to help China with its Belt and Road infrastructure project.

Wang said on Thursday that China was willing to help Afghanistan become a bridge between China and the rest of the world by extending the CPEC to the country.

He also said that China hoped that Afghanistan would keep its promise not to let outside forces use its land to fight its neighbours or harm the security of other countries.

Wang went to Kabul on Thursday, a spokesman for Afghanistan’s foreign ministry said. Taliban took power last year, and it came a day after many people around the world were angry about the group closing down girls’ high schools.

Read more with EL news : The construction of Islamabad Technopolis is about to commence

Foreign governments, including Beijing, have not yet formally recognised the Taliban administration. Many say the Taliban need to show that they will protect human rights, fight terrorism, and run an inclusive government before being officially recognised.

The visit came after a lot of people around the world were outraged that the Taliban government suddenly told girls to stay home from high school, even though it had said earlier in the week that school would be open to everyone.

China will host a meeting of regional foreign ministers later this month, and a statement said that Muttaqi would also be at the meeting, which will happen later this month.

At the time, Pakistan’s ambassador to Kabul, Mansoor Ahmad Khan, told Reuters that “regional connectivity” was essential to their talks with the Afghan government and how they planned to do business with Afghanistan.

“This important project, the China-Pakistan Economic Corridor, has a lot of good opportunities and a lot of good potential for connecting Afghanistan and Pakistan and connecting South Asia and the Central Asian region.”

Mr Khan said that talks had been held with the Taliban-led government about this and other ways to grow the country’s economy.

That’s what I think. There’s been a more of interest in connecting Afghanistan’s economy with Pakistan and other neighbouring countries through the CPEC and with China and Central Asia.

Under the CPEC deal, China has agreed to loan Pakistan $60 billion for infrastructure projects. Most of that money will come in the form of loans.

In 2013, President Xi Jinping started the Belt and Road Initiative (BRI), which aims to use China’s strength at financing and building infrastructure to “build a broad community of shared interests” in Asia, Africa, and Latin America. CPEC is a big part of the BRI, which aims to do this.