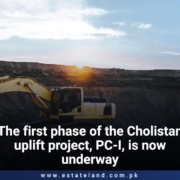 The first phase of the Cholistan uplift project, PC-I, is now underway. Work on numerous uplift mega projects in the region began after the Punjab government released current ADP funds worth over Rs1.06 billion to improve the infrastructure of Cholistan.

Cholistan Development Authority (CDA) Managing Director Dr Saifullah Bhatti announced this. He told that development would take place in stages till 2023. The PC-1 will be prepared for initiatives in agriculture, livestock, education, tourism, and forestry, according to Mr Bhatti. He added that establishing a research centre includes cattle nutrition and forage research in Cholistan in agriculture. In forestry, he said, included eco-conservation and preservation of the environment.

Read more with EL news : The bridge above the Sawan bus terminal has yet to be repaired

Aside from the desert safari, the Lal Sohanra National Park and the extension of the Tourism Development Corporation of Punjab (TDCP) camping village were to be tackled.

Mr Bhatti stated that he would provide mobile schools and a library for pupils. He expressed the hope that the PC-1 would be ready for submission to the Department of Planning and Development soon (P&D).

Read more with EL news : The CDA board of directors has approved bids for 22 commercial plots

IN THE DERAWAR POLICE AREA, THREE MEN WERE BOOKED ON CHARGES OF TORTURING A UNIVERSITY STUDENT AND HER MOTHER.

Ghulam Shabbir filed a complaint with the police alleging that Ansar Baloch had contacted her university student daughter Shahneela on her cellphone. He chastised Ansar and instructed him not to tease his daughter after his daughter informed him about it.

Read more with EL news : A new cemetery for the capital is in the works for residents