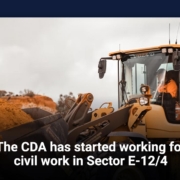 The CDA has started working for civil work in Sector E-12/4. On March 9, news sources said that the Capital Development Authority (CDA) had given the contract to build the new Sector E-12/4.

This will be the most recent addition to the parts of the federal capital that already exist. In Sector E-12/4, the CDA asked for bids from companies that could do building and civil engineering work in the zone that had been marked out. People chose the lowest bid of PKR 289.81 million, which was the one that got the job.

Contractors will lay drainage, water, and sewer lines, as well as build roads, including major highways, street lights, and other development projects, says a spokesperson for the CDA.

Read more with EL news : Information on the progress of the Haripur city monuments

Furthermore, work on the different parts of E-12 will go on as planned. It’s said that in the first week of March, the CDA asked for bids from businesses that were approved by the government. Five companies responded. It’s important to keep in mind that since Sector E-12 was first built in 1989, no new construction has been done there at all. Islamabad’s Master Plan has been changed, so the CDA has just started building.