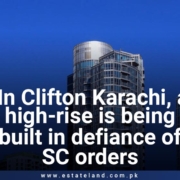 Zamzam Arcade, a 19-story residential/commercial skyscraper in Clifton Cantonment, is being built in contravention of Supreme Court directions. A two-judge court, Justice Gulzar Ahmed, issued an injunction on January 22, 2019, preventing residential and amenity properties in Karachi, including cantonment areas, from being converted to commercial usage.

The issuing of an interim order prohibiting unauthorized construction on evacuee property in Lyari occurred during a civil petition hearing (No. 815-K/2016). There was no subsequent order to change it or set it aside. The Zamzam Arcade is being constructed on a 3,600-square-yard plot of residential property.

The SBCA has published a public notification about the situation. What happened in the months following the apex court’s order, on the other hand, violated it. On June 13, 2019, the Karachi Development Authority, which owns the plot in question, received PKR 9.7 million in unpaid dues from the property owners. In addition, demolition fees, plan to send and cover other services.

The Karachi Development Authority’s Directorate of Land Management submitted a NOC to the Cantonment Board Clifton (CBC) on the same day, naming the four co-owners and stating that the site was “Residential/subsequently commercialized by Master Plan Dept. SBCA.”

According to a retired senior commander from the SBCA, the cantonment board’s reaction was “foolish, unreasonable, and worthless.”

A certified copy of the order was issued to 23 recipients, including the chairmen/CEOs of the Karachi, Clifton, Faisal, Malir, and Korangi cantonment boards and the DG KDA, for urgent compliance. As a result, after more than two years, Zamzam Arcade is still in progress.

A few years ago, CBC established a kachra kundi (local rubbish collection station) near the site. However, they removed it because it obstructs the planned side street entrance to Zamzam Arcade’s residential units. The kachra kundi, according to a local, feeds the nearby residential area and the commercial/residential towers of Forum Mall, Ashiana Mall, and Vincy Mall. As a result, waste is currently being thrown in nullahs and on the streets.

Read more : Pakistan and Italy are looking to expand their commercial and economic ties in new ways