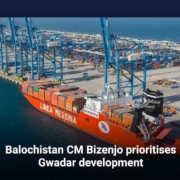 Balochistan CM Bizenjo prioritises Gwadar development. Mir Abdul Qudoos Bizenjo, the Chief Minister of Balochistan, has said that the overall development of Gwadar and other parts of the Makran division is the top priority of the provincial government and that they are doing everything they can to reach this goal.

A press release from the Chief Minister House says that Mr. Bizenjo said this to former minister Mir Abdul Ghafoor Kalmati on Sunday when he was in Muscat.

The chief minister also met with officials from Muscat and talked with them about different problems that Pakistanis living there were facing.

When CM Bizenjo talked to Mr. Kalmati, he told him about the overall development of the Gwadar and Makran division and said that it was the provincial government’s top priority.

“The main goal of our development policy is to bring basic services to people where they live,” the chief minister said. “We also want to protect the rights and well-being of fishermen.”

He said that illegal trawlers and boats were no longer allowed to fish in the waters of Balochistan.

“Borders with neighbouring countries have been opened to make life easier for people living in border areas of Balochistan, and checkpoints that weren’t needed have been taken down,” said the chief minister.

“At all costs, I will make sure that the people of the province have jobs and that their self-esteem and respect are safe,” he said.

CM Bizenjo told Mr. Kalamati that he had told the security forces to earn people’s trust by treating them with respect and dignity. He said that Shehbaz Sharif, the prime minister, also wanted to see Gwadar grow.

He said that every constituency’s development plans would be included in the next budget so that people wouldn’t feel like they were being left out.

Mr. Kalmati spoke at the event and said that the government’s plans for Gwadar and Makran’s development were good, and that the people of Gwadar would not take part in any negative campaign against development.